Holt and Woelfel take the win at UK Nationals

Sailed on the Thames Estuary from Whitstable Yacht Club

Whitstable Yacht Club welcomed a 30 boat fleet to their lovely town. The sun was shining and everyone was anxious due to the heavy wind forecast but the race officer went out, set a course and started the first race in 17-22 knots.

Gillard/Briddon were first to reach the windward mark after a close tussle with Holt/Woelfel up the first beat, followed by Pinnell/Davies and the very quick pack!

The front 5 were extremely close all the way round and finished within 100m of each other. Gillard/Briddon clinched 1st place followed by Holt/Woelfel & Pinnell/Davies.

The next race sequence started but subsequently canned due to a 33 knot squall and a falling tide.

Great close racing had by all the fleet and looking forward to Day 2!

Another great day of sailing out of the Whitstable Yacht Club. We completed three races, although the race committee tried very hard to run a fourth but conditions would not allow it.

The racing was very tricky and in three races we had three different first place finishers. There were big gains to be made to the boats that could limit their exposure and choose the right side of the course. A big mistake could cost you dearly as the races were quite short, generally running around 40 minutes each.

In race number one Nathan Bachelor and Sam Pascoe from Tynemouth Sailing Club won in commanding fashion leading the race for the vast majority and getting the bullet as they crossed the finish line. Philippe Boite/Matheus Fountaine finished Second with Mike Holt and Rob Woelfel in third. 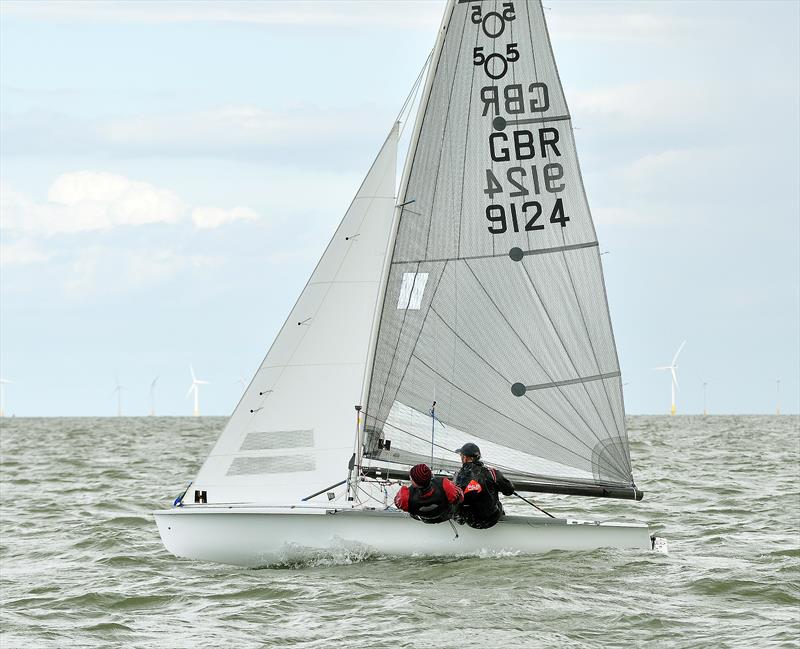 In the second race Philippe Boite and Matheus Fountaine from CVSQ finished first. They held off all challengers with great boat speed and by executing world class decision

making on the course. Mike Holt and Rob Woelfel were in second with Charlie Walters and Dougal Cram in third.

In race three Mike Holt and Rob Woelfel from the Santa Cruz Yacht Club finished first. Philippe Boite and the Matheus Fountaine were right behind to capture second with Michael Quirk and Tim Needham in third.

Another highlight was Andy Smith coming down to visit as he recovers from a pretty gruesome broken arm. It looks like he might be sailing in as little as a week and I am proud to report that his broken arm can already bear the weight of a full-size beer. Get well soon Andy.

The start on Saturday was brought forward to allow for a dropping breeze during the afternoon. Three races were held in a westerly 6-10 knot wind. The overseas sailors seem to be showing the Brits how it's done with 3 teams in the top 4 overall.

Race 1 was a tussle from start to finish with Holt & Woelfel from the USA coming out on top over Quirk & Smith from Australia. Race 2 was won by Batchelor & Pascoe followed by Holt & Woelfel. Race 3 won by another overseas visitor - this time Boite & Fountaine from France.

Holt is the clear leader overall going into the final day of racing on Sunday. The forecast is looking breezy!

Just one race was sailed on the final day, is breezy, cold and wet conditions. A great first beat saw Michael Quirk and Tim Needham establish a big lead they were never to relinquish. While behind the fight was on. By the finish Philip Boite and Matieu Fountaine held off Holt and Woelfel to take 2nd with the American team in 3rd.

Overall this gave the win to the Holt?woelfel team, Boite and Fountaine took 2nd and Batchelor and Pasoce 3rd.